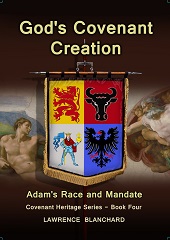 $45.35 including shipping and handling

God’s Covenant Creation: Adam’s Race and Mandate is a study of the meaning of Genesis 1-11 in the context of the rest of the Bible and an introduction as to God’s purpose for creating Adam and who he was.

God’s Covenant Creation is a comprehensive commentary of Genesis 1-11 addressing some of the most critical stories and subject matters of the Bible. Understanding what Genesis 1-11 says and what it means determines your perspective and scope of the Bible and life itself.

Unlike any other book, Genesis 1-11 is approached from the context of Genesis 12 through Revelation as determined in Books One through Three of the Covenant Heritage Series. Thus, Book Four is not a stand-alone treatment of Genesis 1-11, but is most accurately understood from the broader context of the rest of the Bible.

Some of the important questions answered in God’s Covenant Creation include:

God’s Covenant Creation challenges the majority opinion in almost every aspect and conclusion of the meaning of Genesis 1-11, particularly the creation story (Genesis 1), the Flood (Genesis 6-8), and the Tower of Babel event (Genesis 11). This book also challenges the meaning of the word “nations” used in Genesis 10 which is typically assumed by Catholics and Protestants alike to be inclusive of all “human beings” on the planet.

God’s Covenant Creation demonstrates the consistency in understanding what Genesis 1-11 says and means in the context of the rest of the Bible. Fill out the form on the right and get a free download of the Table of Contents and Introduction.

To order your book click this link:  YourBiblicalHeritage.com Store

“This book (4) surely did not disappoint, even where my own internal ‘jury’ is still out deliberating on certain topics covered (e.g. the scope of Noah’s flood). This volume astutely presented excellent insights, data, and information I’ve seen nowhere else. Every few pages was enthralling from the book’s start to its finish. It solidly and persuasively, even conclusively, answered a lot of questions I’ve had for decades, and raised some new questions, then answered them astutely, some with vital empirical data. The exciting adventure of this series increases with each new book.” – FL, MI

“I have been excited about the Covenant Heritage Series since Lawrence Blanchard and I first discussed his idea several years ago. Since Blanchard is one of the very few Bible scholars I know that passionately places truth above denominational doctrines, mainstream opinion, or even creeds, I knew his work would be ground-breaking.

“I share the author’s conviction that the Word cannot be understood outside the Covenant made between God and man. The Covenant Heritage Series stands alone as the first, true attempt to force the believer to “reboot” by starting from the very beginning of the Inspired Word, and working to the very end, in the context of Covenant.

“Book Four of the series, God’s Covenant Creation, unarguably sets up deal-breakers for the mainstream reader. Do all peoples come from Adam? Is the Covenant between him and the Hebrew God, Yahweh, necessarily extended to all peoples as “one blood”? Was Noah’s Flood really global? Does the Genesis account of Creation really concern the building of the literal, physical universe?

“Lamentably, Judeo-Christianity has revealed no truly powerful insight or innovation – in spite of their self-proclaimed authority – for decades. However, if the reader doesn’t see the proverbial train coming halfway through God’s Covenant Creation, they’re not paying attention!

“I encourage the reader to begin with the first book in the series, Discover the Story of Your Biblical Heritage: Laying the Foundation. Truly, if you seek understanding, these can be the most powerful books you will encounter in your Christian walk.” – Brad